Things to do in Hawaii

Built in 1882, Iolani palace was heavily influenced by European architectural styles, and was the first royal residence in Hawaii to have electric lights, indoor plumbing, and telephones. Later when Hawaii was made the 50th state, it was used as the capitol building.

Today the Iolani Palace is open to the public. Both professional guided tours and self-guided audio tours are available to the palace Tuesdays through Saturdays. About half of the original furnishings have been restored to the Iolani Palace to give it the authentic look of its royal heyday.

The Iolani Palace is also available as a venue for private events like weddings and special occasions.

Tips for Going to the Iolani Palace 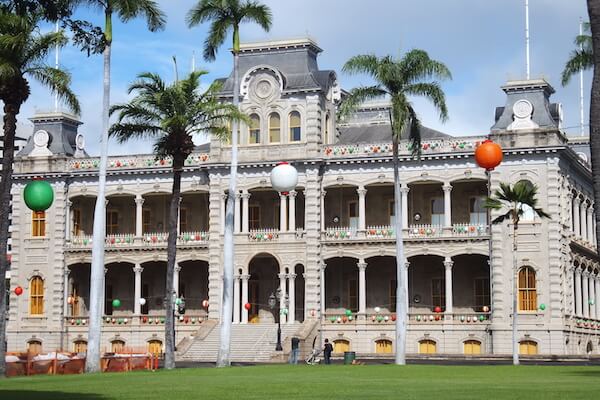 Our quality starts with the intent to be a completely non-invasive tour company dedicated to revealing the real truths and history of the land and people of our home, Hawai’i. We use smaller vehicles for all of our Hawaii tours to provide a more intimate, relaxing, and safer travel experience. Our passionate, local employees welcome you to our beautiful state of Hawaii and take you back in time to experience the Kingdom Hawai’i once was. Safety and dependability is developed through continuous training and are the cornerstones of our tour service.

IMI Tours offers a total of 8 tour excursions on Oahu, Maui, Hawaii, and Kauai. From the “Road to Hana” to Pearl Harbor, we have tours to educate, entertain, and inspire! We invite you to explore our Hawaii Tours and find the activity that works best for you.

As a non-invasive tour company dedicated to sustainability, it is our vision to accurately share and perpetuate Hawaiian culture and history while creating a fun and memorable experience for our guests. We are part of the eco-tourism movement in Hawaii and partner with sustainable farms, ranches, and other venues to support local business and create an authentic Hawaiian experience.